Summer has officially been and gone, and almost as if on cue the leaves here in Stratford have started to redden and fall. A new cohort of students has arrived, and just three days into the term it feels as if they’ve always been here. The only difference is that I’m on study leave this term, observing all these changes from my window rather than being in the middle of things.

For this precious term of leave I of course have many research goals, and hopefully I’ll be writing more about some of them on this blog in the months to come. But for now I thought it might be helpful to look back at what I’ve been working on this summer, not least because taking stock often helps me focus my mind as to what comes next.

While my blogging over the summer has been woefully thin, my academic writing has, happily, been much more fulsome. (I did win a readers’ award for my blog in July though! Official badge below.) Earlier this year I finally wrote up a long article on cinema broadcasts of Shakespeare productions, and I’m very happy to say that the finished version will soon appear in Shakespeare Bulletin as ‘”The Forms of Things Unknown”: Shakespeare and the Rise of the Live-Broadcast’. In many ways this article is the direct result of the thinking that I’ve been doing on this blog for the past four years, so it’s especially gratifying to be able to announce its forthcoming publication here. 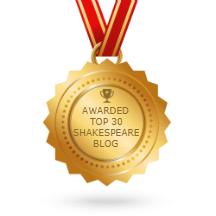 In addition to this I’ve also been working on a chapter for an essay collection on Shakespeare and live-broadcasting edited by Pascale Aebischer, Susanne Greenhalgh, and Laurie Osborne, which will come out with Arden next year. My chapter, ‘The Audience is Present: Aliveness, Social Media, and the Theatre Broadcast Experience’, analyses a large set of tweets from two 2016 broadcasts and uses them to make a case for the importance of experiential ‘aliveness’, which I suggest is related to, but ultimately distinct from, the more familiarly debated concept of ‘liveness’. Both pieces have been a pleasure to work on and I’m very excited to at last be publishing research on both the formal and experiential dimensions of theatre live-broadcasting.

But what next? Well, I am certainly planning to write at least one, and hopefully two, chapters of my book on Shakespeare and digital performance over the next six months. The one I know that I’ll be tackling is chapter 2, on live recordings and broadcasts, which is a no-brainer considering how much work I’ve already been doing on the topic over the last year (and more). The other one is less certain: it could be chapter 3, on digital or ‘intermedial’ dramaturgies, or it could in fact be chapter 1, on theories of digital performance. I had originally intended to write that one last, since it needs to encompass all of the issues covered in the book’s more practical chapters, but having had a go at theorizing ‘a/liveness’ in the aforementioned edited collection essay, as well as on this blog, I’ve begun to realize that doing some of the abstract work before the applied work is more possible, and productive, than I originally thought.

As I attempt to work all this out, I’m still trying to experience as many digital projects and productions as possible. That means a large helping of theatre broadcasts screened here in Stratford, but also as many digital things as I can muster when I’m on the road. At the start of September my family and I finally had our summer vacation, which we spent exploring Belgium, the Netherlands, and Luxembourg. During that time I was lucky enough to catch two very exciting and very different digital engagements with the arts. The first was the Musées Royaux des Beaux-Arts in Brussels and Google Cultural Institute’s ‘Bruegel: Unseen Masterpieces’ exhibit, which explores three Bruegel paintings through an immersive film installation. I had already experienced part of the project through Google’s online feature, and in particular its 360º-enabled video for Google cardboard (the video in the link above automatically displays in 360º when you watch it on a VR/Cardboard viewer). In person in Brussels I was delighted to be able to see the full version of the project, a digitally enhanced video projected onto three walls, which illuminated dozens of details in the painting and proved a richly beautiful aesthetic experience in its own right (and my companion agreed!). The project illustrated the value of remediation in a powerful way: this wasn’t just about creating digital copies that could be accessed more widely, but rather about using digital technology to open up existing works of art in a way that might deepen our appreciation of them.

When we got to the Netherlands, things got a bit more theatrical: in Amsterdam we were able to see Simon Stone’s adaptation of Medea for Toneelgroep Amsterdam, a company that we and pretty much everyone else in the theatre universe has grown to admire. As is often the case with the group’s productions, live video featured prominently. In this drastically updated version, the two young sons of Anna (Medea) and Lucas (Jason) are making a video of their (steadily deteriorating) family life. On the white box stage, the video feed from the boys’ camera frequently appeared, zooming in on the strain, surprise, and sometimes happiness that crossed their parents’ faces. More abstract, non-diegetic footage, usually filmed from a bird’s-eye view of the stage, also flashed onto the backdrop at times, giving audiences a heady, out-of-body take on the explosive tragedy that we all knew would unfold. As is often the case with live video on stage, the camera simultaneously objectified and personalized its subjects, pinning them helplessly within its frame while also illuminating otherwise hidden traces of their inner lives. Like with the Bruegel exhibit, ‘unseen’ details of Euripides’s ‘masterpiece’ came forcefully into view, both through Stone’s engrossing adaptation and the camera’s penetrating gaze. And I think that’s where I’ll leave things for now: tech as microscope, at once distancing us from ‘originals’ and yet drawing us more deeply in.

Join 60 other followers
Emotion and the Arts