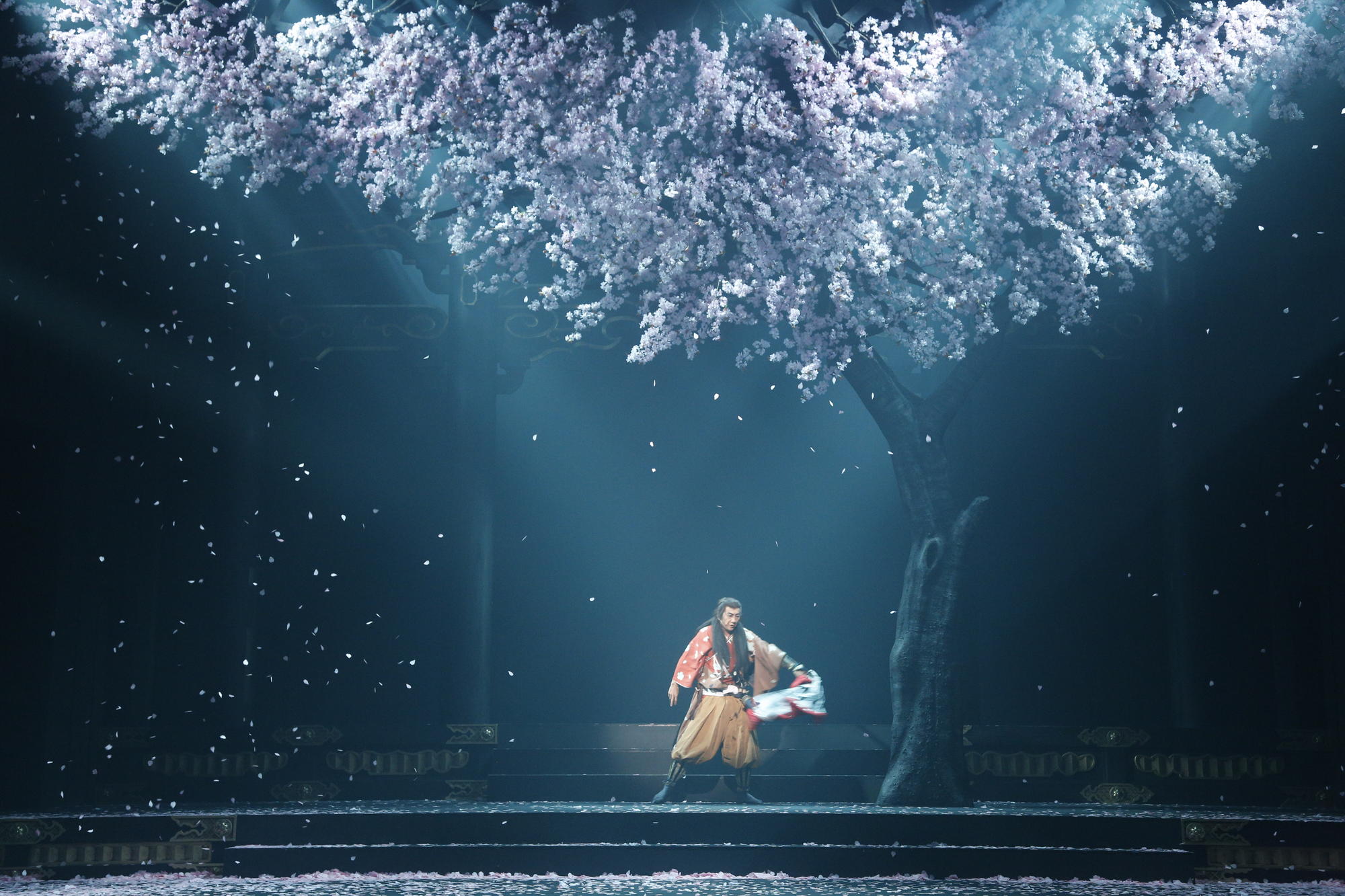 This week at the Shakespeare Institute was a particularly exciting one. A delegation of colleagues from Waseda University in Tokyo came to see us and speak about the late, great theatre director, Yukio Ninagawa. Their visit coincided with the Ninagawa Company’s most recent residency at the Barbican in London, where they performed their revival of Ninagawa’s 1985 production of Macbeth (the production that first brought him to fame in the UK). The Institute and Waseda hosted a special symposium on Ninagawa at the Japanese embassy in London on Friday, and then on Saturday I was lucky enough to get to see the production myself (at last!). I won’t review it here, other than to say that it was genuinely astounding in many ways and that interested readers can find out more from Michael Billington’s expert account for The Guardian.

What I would like to do is share a bit of writing that I’ve been working on that relates to another Ninagawa production: the Titus Andronicus that he brought to the RSC in 2006. Like his Macbeth, which Billington describes as ‘unashamedly pictorial’, this Titus was a visual wonder — a fact that has led me to focus on it in an essay I’m writing on Shakespeare, the senses, and twenty-first-century performance. For this essay I’m selecting one production to illustrate the power of each of the senses in the theatre, and while Ninagawa’s productions are sensuous in many ways, it probably won’t surprise those familiar with his work that I’ve decided to choose his Titus to talk about sight.

Below is a draft of part of the section — still a work in progress, but moving in the right direction I hope!

Many contemporary directors have sumptuously embraced the possibilities of visual experience, in particular those also working in opera or film, but there is arguably no greater practitioner of the art in recent memory than the late Yukio Ninagawa. ‘Always visually ravishing’, ‘staggering aesthetic beauty’, ‘so beautiful, [it’s] painful to look at’—these are the kinds of phrases that critics in Britain, as well as Ninagawa himself in his interviews with them, have applied to the director’s work (‘Yukio Ninagawa’ 2017; Billington 2017; Ninagawa qtd in Secher 2006). It perhaps comes as little surprise, then, that he originally aspired to become a painter before turning his attention to drama in his twenties (Huang 2013).

Consider his iconic staging of Titus Andronicus, for instance, which played in Stratford-upon-Avon for a week as part of the Royal Shakespeare Company’s 2006-7 Complete Works Festival, making it ‘the first Japanese-speaking Shakespearean production to be performed in the Royal Shakespeare Theatre’ (Kawai 2009: 276). A vast, icy-white stage, almost blue in its frigidity, framed the action of this vicious revenge tragedy, providing a pristine canvas onto which its gore might spill. But audiences soon found that stage blood was in short supply: in an echo of Peter Brook’s 1955 Stratford production, billowing strands of ‘Kabuki-derived’ red yarn twisted and hung from each character’s newly opened wounds, be they Alarbus’s severed limbs, Lavinia’s mouth and wrists, Chiron and Demetrius’s bulging necks, or Tamora’s back as Titus drove a knife into it in the final scene (Billing 2007: 205). The effect was at once patently artificial and uncannily shocking: against the antiseptic white of the stage, and the contorted agony that constantly emanated from the actors’ faces, these stark rivers of blood pointed like arrows to the unspeakable violence at the heart of the play. At the same time, in their strange, emblematic beauty, they released the production from the trappings of naturalism and set it adrift in a mythic, dream-like world.

No scene illustrated this heady mix of brutality and beauty more vividly than that of Lavinia’s mutilation in the forest. After the close of Act One’s court scenes, which featured a towering statue of a she-wolf suckling Romulus and Remus, the stage went entirely to black. Just a few seconds later, or at least so it seemed, lights returned to reveal a dazzling stage filled with dozens of huge, pearly lilies, set against a jet-black scrim and dappled with blueish light. This ‘scenographic … coup de théâtre’ literally set the stage for the nightmarish violence that soon followed (Billing 2007: 206). After Bassanius’s murder, and Chiron and Demetrius’s off-stage attack of Lavinia, the latter returned and staggered downstage, shrieking in horror and swathed in streams of garish red. Behind her followed Tamora’s howling sons, naked other than the bloody loin cloths that covered their genitals and the lurid strands of crimson yarn that decorated their bodies. Against their grotesque laughter, Hitomi Manaka’s Lavinia stumbled towards the edge of the stage, where she sank to the ground and raised her ribbony stumps to the sky for all to see. Positioned front and center in this perfectly composed mise-en-scène, Lavinia’s searing pain was thrown into relief—both visually and viscerally—by the ethereal beauty of the stage that surrounded her and the intense contrasts of red, white, and black that it presented. When Marcus at last entered, his niece moaned in dread, draping her long hair over her face and frantically trying to hide herself, to no avail, behind one of the set’s delicate lilies. No matter where she went, the shocks of red that issued from her arms and mouth made sure that all eyes remained fixated on her.

The stunning dissonance at work in Ninagawa’s rendering of this sequence goes some way to explaining why such a gruesome moment has become the production’s most reproduced, and implicitly most celebrated, image. Unspeakable violence and astonishing beauty sit side-by-side, with each extreme intensifying the other through the force of their juxtaposition. ‘When will this fearful slumber have an end?’ (3.1.251), Titus asks in response to the butchery inflicted on his family, but witnesses to Ninagawa’s extraordinary vision of the play have been less willing to wake from his other-worldly dreams. The fact that the majority of the production’s international audiences did not speak Japanese contributed to this sense of captivating, even hypnotic, estrangement, as well as a heavy reliance on the visual—or, as one critic put it, the experience of ‘hearing with eyes’ (Gilbert 2007: 39). With Shakespeare’s original words gone, Ninagawa’s use of colour, composition, and contrast translated the play imagistically, ‘turning [its] horror into visual poetry’ (Macauley 2016). In this sense, Ninagawa more than realized his early dreams of becoming a painter, though on a bigger and more dynamic canvas than he likely ever imagined.